If there is anything I’ve desired most in life, other then helping others, it’s been to travel the world. Earlier this year we had booked our tickets for Paris, my dream destination, but after being diagnosed with breast cancer for the second time and undergoing surgery, I had to postpone my trip.

As the year went by and I underwent one treatment after another, we realized that if we didn’t reschedule our trip prior to the years end, we would forfeit the money we had invested earlier in the year so, we booked our trip to Madrid, Spain for the Thanksgiving holiday. 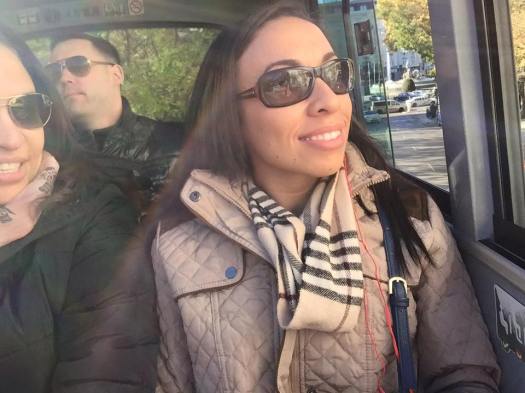 I couldn’t have been happier with the destination we chose. Madrid and Toledo, the two main towns we visited, were amazing. The architecture was breath taking, as was the history behind the structures and landmarks that surrounded me.

Of course, the food was also delicious. Especially the

typical Churros and Chocolate that I had at least once a day while there. 🙂

This trip inspired me once again to fulfill that desire to walk the last 100km of el Camino de Santiago de Compostela in the year 2016. It’s an experience of a life time and I feel I am finally ready to take on not just the challenge, but also humbly accept and appreciate what that journey has to offer me. I returned refreshed and in love with life, feeling no boundaries existed, even those I built in my mind, moving me into the next stage of my life… 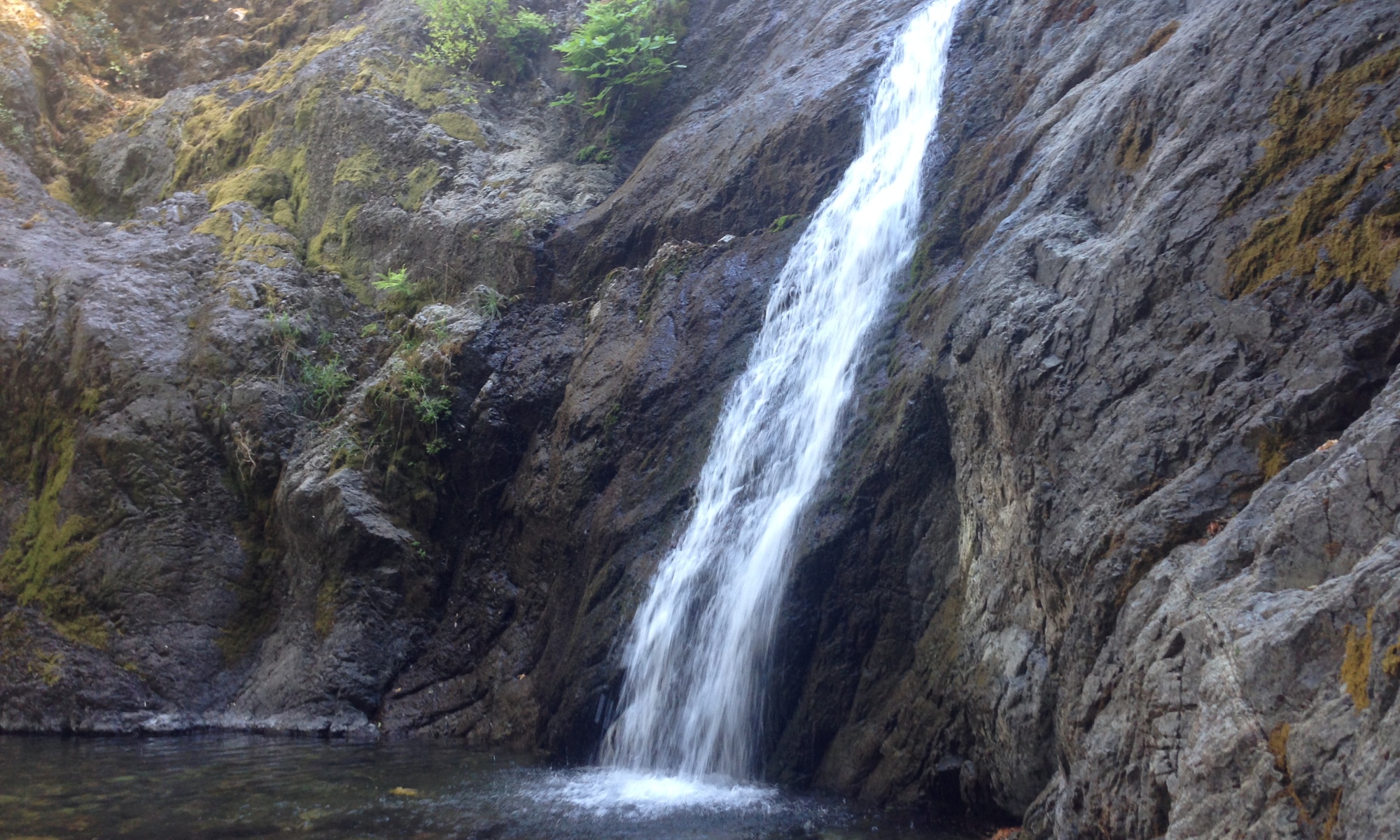 After our first group meeting, we headed out for our first hike. Our destination, Fairy Falls, was not very far from the bed and breakfast. Once we arrived, we each took the opportunity to enter the fall, giving ourselves a fresh new start to our individual journeys. I remember slowly making my way to the water and freezing up the moment I took my first step in. The water was colder than any water I’ve ever felt. My first instinct was to run and reject the cold water like I normally would. Then, someone said, “come on, who’s going to be the first girl to enter the fall”?

That’s when the insane competitive side kicked in and said, “come on, be brave, you can do it!!” I guess, having a slight competitive edge paid off this time because it was just what I needed to drum up the courage to walk right into the fall and lose myself in the moment. It was so cold and I could barely stop shaking enough to keep myself standing. I remember screaming “Mahalo”, like those before me, and feeling an instant surge of energy run through my body. It was as if my body had finally woken up from the stagnant stage it had been in for so long.

One by one, others followed, as those who had already entered cheered them on. We then found a spot of our own along the stream to enjoy our surroundings. It was beautiful and peaceful. You could hear the wind blowing through the trees, the water from the fall and it flowing down the stream, and the birds singing songs of joy. Though I suppose in their own language they could have very well been asking each other who’s bringing what to the next family gathering. Lol


The following day after gathering again as a group, we carpooled up to Crystal Lake. It was a short hike to the lake, and the spectacular area where we all enjoyed lunch together while soaking up the nature around us. I felt so lucky to be living that moment. To often, I have a million things running through my head and a to do list, like many, that never ends. There, the only thing I had “to do” is enjoy that moment.

After a group meditation and healing exercise, we made our way to the lake for a refreshing swim. Now, when I say refreshing, I mean it was really cold. Granted, I’m a Florida girl who has been guilty on many occasions of complaining about the beach water being cold where I live, but this really was cold! For me at least. I promise not to complain about my beach again. All in all though, it was very nice, and I had yet another chance to do something I normally wouldn’t have done.

On our way back to the B&B, I received a call that completely made up for the cold water I had jumped in. While at the falls the day prior, I had asked god to please continue to provide me with opportunities for growth and to help me find balance in my career. I was spending so much time on the road, and I wished nothing more than to be closer to home. If only I could move the office closer to me, right? Well that call was just one of the few gifts this journey and god had provided me with. I was offered a job in the city, about 15 mins away from home, making much more than I was currently making, and with many additional benefits. It was the package I had been looking for when I had previously interviewed for the company. At the time the position hadn’t been available, and out of no where, BOOM, there it was!

Never in my life had I done such a crazy thing, but I accepted. In that moment, I couldn’t believe the opportunity I was presented with. I also had no idea how I was going to inform my current employer of the life changing decision I had just made. I had always pride myself in being loyal to my employer, and here I was deciding to leave after only 2 weeks. I couldn’t pass up the opportunity though, and I had to follow my intuition.

I spent the rest of my afternoon thinking of what I would say to my boss. Was I going to tell her by phone? Would I wait till I got back? The new executive administrative position I had accepted was ready for me to start as soon as I got back home. I felt however that I still needed to provide some sort of notice and I wanted to do so as soon as possible, even if it meant doing it by phone. We had a 3 hour time difference and I had reached my room late that evening. The call would have to wait till the following day…

It was only about 2 weeks ago, that I was blogging about how my first week at my new job going. Since then, so much has occurred. My first 2 weeks at the gynecology office had gone really well. My coworkers were great and it felt amazing to be in the workforce again. However, traveling was proving to be a little tougher than I had anticipated it would be. I was finding myself spending anywhere from 2-3 hours of my day, driving to and from work. I didn’t think it would be such an issue considering I had traveled long distances before for work, but it was really starting to wear me down. Luckily, I had planned a vacation prior to starting my new job and it would serve as a good break for me to recuperate.

It was August 16th, when we hopped on a plan heading to San Francisco, California. I was super excited to embark on another new journey. This time I was doing a spiritual retreat in Mount Shasta. I honestly didn’t think much of it at first. I just knew we would be hiking, meditating, and doing some yoga. That alone was a great vacation in my book.

Our flight from Ft Lauderdale, Florida to San Francisco, California was 6 hours long, and Mount Shasta was a good 5 hours away from San Francisco.

For the record, I would recommend arriving in Sacramento or Redding, California instead. It will easily cut the drive time in half. If you don’t have that option, plan to stay the night in San Francisco and drive up the next morning. You’ll be happy you did.

Upon arriving at the lovely Mt Shasta Bed & Breakfast, we checked in, I placed my bags on the room floor and passed out like a baby after a heavy meal.

The next day, I showered up and made my way to the dining room where breakfast was served daily to all of the house guests. There, we slowly began to meet some of the individuals that were also partaking in the spiritual retreat. They were all very sweet and pleasant to talk with. Each with a unique background and wealth of information. As much as I enjoy being a social butterfly and talking to others, I found myself happily listening to each conversation, eager to learn more about the people I would be spending the next 7 days with.

Later that morning, we explored the town a bit and decided to rent some mountain bikes. The sun was out and there was a cool breeze in the air. With the view of the beautiful mountains surrounding us, it was hard to deny myself the desire to ride again. We mounted our bikes and cruised through the city and eventually made our way to lake siskiyou. It was so beautiful to see a big lake surrounded by such a majestic mountain. When I took a closer look, I could see the locals swimming and canoeing, while others played fetch with theirs dogs. In that moment, I began to feel grounded again. The fast pace of the city was drowned out by the nature all around me. I could have stayed there all day, only we had to return the bikes to the store and make our way back to the bed & breakfast for our first group meeting.

Andrew, our group leader, and his partner in crime Lauren, welcomed us and gathered us into a circle. One by one, we were asked to introduce ourselves and express to the group why we were there. In other words, what did we expect to get from the retreat. I was honestly looking forward to some time off. However, when it was my turn to speak, the most natural explanation to leave my mouth was, “Since being diagnosed with breast cancer, I’ve wanted to stress less about the little things in life and focus more on living my life and my true purpose”. I can’t recall if I worded it just so, but it’s pretty close to what I remember saying. I don’t even know where the words came from. I hadn’t met any of these people before, and here I was, sharing such a personal experience without flinching a muscle. I have blogged about it, yes, but never have I spoken to such a large group of people about it. In that moment I knew that this “vacation” was going to provide me with more than just time to meditate, hike, and do yoga. I was going to continue my growth in a way I had been longing to for some time and I look forward to sharing my experience with you all…